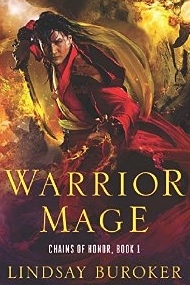 As I read more and more indie fantasy authors, Lindsay Buroker is quickly becoming one of my favorites. She’s also fun to follow on Twitter, if you’re on there. Well, she has a new serious out called Chains of Honor and just recently book one became available. I was lucky enough to snag a free copy by being on her mailing list, but I can tell you that this is one worth paying for!

Those of you who are already familiar with Buroker’s work need know that although this is a stand-alone series, it is set in the same world as her Emperor’s Edge books. This series is definitely more traditional fantasy than the EE books though, which is awesome for old school fantasy fans like me. Also, the Sword and Salt collection is a prequel to this series, but not required reading.

Before reading any further, know that the review below contains some minor spoilers.

I knew that I was in for long haul when … Yanko got a hard time from the other Stargrind applicants and just barely missed qualifying. I wanted to root for him immediately and I hadn’t even made it out of chapter one yet! Then, as soon as Lakeo is introduced in chapter 2, I just loved her sass and snark. I will say this about Buroker, though she ofter writes her female characters in the same manner, they are always the strong, sassy type and I just love that type of no-nonsense female character. Basically, I was into this book from the very beginning and it only got worse for me as it went along. I was on a plane when I started reading this book and having to put my Kindle away for landing was pure torture.

Style snippet … I tend to enjoy the way that Buroker writes. It’s not overly complicated, high-brow writing, but still better than what most authors bring to the table. And she really excels in humor and snark.

“Well, well, well,” came a woman’s voice from behind him. “Look who’s back in the mines. They didn’t want your pretty face at Stargrind, after all?”

Yanko ground his teeth as a second punishment walked into view carrying a box full of carving tools. Lakeo stopped to look at him, a fist on her hip. She wore a shaggy sheepskin vest that left her muscular arms bare, aside from a pair of leather arm guards. Her short, black hair stuck out in all directions, as if she had been struck by lightning recently.

“I don’t want to talk about it,” Yanko said. He did not stop pushing or leave the screw, even though he could have at any time. He might have failed his entrance exams, but he was still moksu, and his family still oversaw the mine. Most of the people here were criminals, prisoners of war, or serfs, so he outranked them. Not exactly a great boon.

“Enh, Stargrind is for prissy know-it-alls, anyway,” Lakeo said. “You would have hated it.”

As usual, Lakeo acted as if she was so much more knowledgeable and worldly than he, even though she had grown up in some dusty village not ten miles from here and, by her own admission, had never been over the mountains and to the sea, or to anywhere more than a day’s walk away. She was only a couple of years older than Yanko, but she always seemed to think she was far more mature than he.

“Is this what you’re going to do with the rest of your life?” Lakeo pursed her lips and eyed the screw and the muscled slaves, men too tired and beleaguered to care about their conversation. An overseer stood on a platform overhead, tapping out a drumbeat to keep the men working—and to make sure that nobody started any trouble. Those known for it, or known to be dangerous criminals, wore glowing control collars around their necks.

“I haven’t decided yet. I’ve only been back for a day.”

“Don’t you think you’re kind of a burden on them?” She waved at the workers. “You’re awfully short and scrawny in comparison.”

Yanko caught himself flexing his muscles and puffing out his chest, despite the fact that he did not care one iota what Lakeo thought of his physique. If he had been scrawny, he might have simply accepted her ribbing, but he had gained ten pounds of muscle in the months he had been working here. Sure, at five-foot-nine, he might be shorter than a lot of the hulks in the mines, but that was because most were half-breeds or even full-blooded Turgonians, and those people were commonly over six feet. For a Nurian man, he was perfectly normal in size.

“You’re just overgrown.” Yanko bit back an urge to comment on her dubious heritage, having figured out some time ago that she had at least some foreign blood flowing through her veins. In Nuria, that wasn’t considered a good thing.

You can read a longer excerpt on the author’s website.

What surprised me about this book … is that a romance wasn’t front and center in it. I’ve read more than one of Buroker’s books and find that they are mostly romance books set in a fantasy universe. Nothing wrong with that, of course. So, going into this one, I was expecting it to be heavy on the romance. Sure, Yanko has a bit of a crush on someone, but it’s more of a side story instead of main story, which is nice.

My favorite character … is probably Lakeo. She is strong, funny, mysterious, vulnerable, snarky and just all-around awesome. In such a short amount of time, we really see her character start to grow, even if she does resort to some old school thieving at an inopportune time. Honestly, I really like Yanko’s character too. He starts out being somewhat weak and unsure of himself and very quickly turns into a leader. And, this quick character growth is actually believable.

Overall, this is one of my favorite books that I’ve read this year (so far). It really harkens back to some of those old school fantasy books where the character starts out the book by setting off on this epic quest. So, if you are into that, then you will DEFINITELY want to pick up this book. Before you read it, just know that it is probably a bit more YA fantasy than something targeting adults. If that doesn’t bother you, then you are in for a fun read.

You can download a copy from the following retailers: