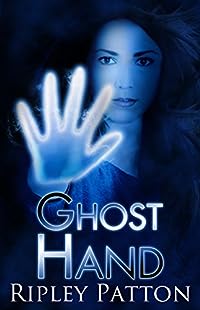 One of the more interesting speculative fiction books that I’ve read this year is Ripley Patton’s Ghost Hand. This is the first book of The PSS Chronicles series.

As you can probably tell from the title and the cover, this book falls squarely in the paranormal category. In the world that author Ripley Patton has created, sometimes people are born with parts of their body being made of up a ghost-like energy instead of actually being a normal body part. Kinda cool, huh?

Another thing that you should know about this book is that it is a young adult book. It is actually very young adult – I’m talking about teens obsessing about crushes when they should be worried about sudden death.

And now, onto the review…

I knew that I was in for the long haul when … I learned about the ghost parts premise. It seems like such a unique story. I certainly know that I haven’t read anything else like it. And when you get to the part where we learn about what’s going on with Marcus in this respect, well that adds a whole new level of intrigue and coolness to the story.

“You’re gonna be fine,” I told him. “We just need to get you some help.” He was my age. He was good-looking and in my Calc class. And I was lying on top of him under a hedge. He wasn’t allowed to stop breathing under those circumstances.

I wrestled my way out, pushing against the trunk for leverage, clutching at branches and grass to pull myself free. Once I rolled off his chest, the rest was pretty easy.

I yanked off my backpack and set it beside me, then reached into the dark under the hedge and felt for his arm, wrapping my hands around it. It wasn’t cold yet, or stiff. How long did that take? How long after someone stopped breathing could you still revive them? I had no idea, but I had to try. First though, I had to get him out from under the damn bush.

I pulled, but he barely budged. I got on my knees and put my back into it. That was enough to get one shoulder and half his head out. After that I was able to grab under his armpits and drag him out so that his whole head and chest were clear.

Now, I just had to remember the CPR class I’d taken freshman year so my mom would let me babysit the Waverly twins. First, I was supposed to check for breathing. I’d already done that. Next, check for an obstruction. His mouth was hanging open, but all I could see was his tongue. It wasn’t black or blue or swollen, and it didn’t look like he was choking on it, so I left it alone.

I pinched his nose closed, and bent over his head, terrified that any moment those blank, open eyes were going to focus on me and he was going to laugh in my face. It was psyching me out, so I closed my eyes. I felt my lips touch his face. I had to open my mouth surprisingly wide to span the distance around his mouth, and then I realized I hadn’t taken a big enough breath. Crap. I pulled away slightly, gulped in some air and dove back toward his mouth like I was bobbing for apples. Huff. Take a gulp of air. Huff. How many times was I supposed to breathe into him? Just a few more for good measure. His mouth was warm, but not firm. I began to see flashes of light on the inside of my eyelids. Maybe I was huffing a little too much. The last thing we needed was for me to pass out on top of him. I pulled away and turned my head so my cheek was just above his mouth.  Come on. You can do it. Breathe back at me.

What surprised me about this book … was all the thinking about how hot Marcus is when there were more important things to be concerned about (like the bad guys?). And yeah, I knew that this was a YA book when I started it, but I read YA books here and there but this seemed a little excessive to me. Yes, I know that teen girls want to read about their attraction, but still…it was a little much for me.

My favorite character … was kind of a toss up. I really liked Olivia’s best friend (can’t remember her name right now) as well as Nose. They both had some good scenes. Jason was also a pretty interesting character. If he is in the rest of the books, I could see him becoming a favorite if there is some character growth.

Final thoughts … though I thought all the teenage crush stuff was a little overkill, the overall story itself was really enjoyable. It’s hard to find a book with a unique story and this one is definitely unique (at least for me) and that was definitely refreshing. And it has some thriller/suspense style aspects, which was a little different for the genre but worked out well. I’d definitely suggest reading this book. And I could see myself carrying on with the series to see how it all works out in the end.

This book is on Amazon, so download a copy for your Kindle!