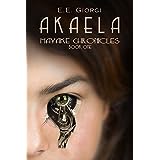 Last month author E.E. Giorgi offered to let World’s Edge Tavern read the first book in her Mayake Chronicles series, Akaela, in exchange for an honest review. The book is a YA dystopian novel that features droids, humans who are part machine, murder, mystery and mayhem. Basically, it has pretty much everything that you could ever want out of a good sci fi novel.

It took me a little longer than expected to get to this book, and when I did I was a bit sad that I hadn’t been able to start it sooner. It was truly a great read and I was sucked into the story from the very beginning. And, I’m already looking forward to the next book in the series.

And, I just want to point out this book is available in Kindle format.

If you’re interested in more of my thoughts on the book, keep reading but know that there might be some minor spoilers. Or, check out the excerpt of this book here to see if it’s a good fit for your reading habits.

I knew that I was in this one for the long haul when … the book started – seriously. The book starts with the main character telling you about the most dangerous part of droids and then mentions that they are tracking one with intents to steal that part. And as if that isn’t a cool enough way to start the book, you’ve got these siblings who can communicate without speaking due to the genetic engineering of this dystopian world. Awesome.

He can measure how high I’ve climbed thanks to his built-in inclinometer. Five more feet and I’ll reach the top of the mesa from the bottom of the gorge. My bare fingers brush against gravel. A glaring sun peeks down from above, the sky a pale blue hazed by the smoke of the Gaijins’ fires. I stretch one arm up and grope for a new handhold until I reach the top of the ridge and climb over the edge. Up here, the M3 scavenger droid can no longer spot me. It will keep scraping the rocks in search for titanium-rich sediments and other metals, robbing our volcanic land of its richness.

I scan the horizon. Kael hovers above me, his shadow drawing black circles over the solar panel fields. Beyond the fields, the forest brims with tension, naked trees retracing the snaking path of the Kawa River. I raise a hand and feel the ridge lift—the wind hitting the cliff side of the mesa—blowing up.

Time to set our trap.

“Now!” I message Athel. Kael catches my signal and swerves down into the gorge. The M3 droid spots it immediately, its thermal imaging sensors built to detect the slightest rise in temperature within a radius of five hundred yards. Its lenses zoom out of their sockets, trained on the falcon diving down between the high walls of the gorge.

The droid lifts its right hand and balls its metallic fist. Its decisional algorithm has deemed the threat worth shooting. I crouch over the edge and watch, grinding my teeth. The first rounds zip through the air. Just as fast, Kael dodges them, his cyborg reflexes fueled by nanoelectric impulses traveling down his brain. He swoops over the droid and then lifts up again, the M3’s bullets trained on his movements yet failing to catch him. Three more clicks and then the gunfire ends. Kael makes another dive, and this time he gets so close his talons claw at the droid’s head. The M3 zooms both lenses, rotates one hand and points it, its reflexes slow compared to Kael’s.
Come on. Fire the darn thing!

What surprised me about this book … was actually the twist at the end that brings to light the betrayal among the Mayake people. The author did a good job of not making it overly obvious before it was revealed. It’s always nice when something that is supposed to be a surprise is actually surprising like this. I don’t want to say to much and ruin it for anyone, so I still hope you’re surprised when you get to it!

My favorite character … honestly, I can’t pick just one. I really enjoyed the two sibilings (Akaela and Athel). They are very different from each other. And there’s also Athel’s BFF, who is a pretty interesting guy as well. I guess that means those three are my favorite!

Final thoughts … I really enjoyed this book and I’m not lying when I say that I’m looking forward to Book 2. I also really appreciate that even though this is part of a series, the author didn’t leave us hanging with a major cliffhanger ending. You can totally read this as a stand alone book, yet you’ll still be wondering what happens next. As a reader, I find this to be the preferable way to get to me actually keep reading a series as opposed to what a lot of authors do, which is end the book in the middle of a scene. So, thank you for that, E.E. Giorgi!

Before I started this book, if you had asked me if I’d enjoy books with droids and genetically engineered humans, I would have answered – “maybe?” But I have to say that his book has me really excited about this genre and interested in looking for similar stories. So, if you’re not certain that this book meets your typical reading interests, I urge you to just give it a try because I really, really liked it.