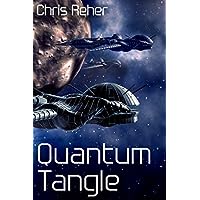 Whether you are new to space operas or already enjoy reading them, I want recommend Chris Reher’s Quantum Tangle for your TBR pile. Personally, I think I’ve only ever read one other space opera before this, which I enjoyed, and that book was heavy on the romance and light on the whole space and science-y stuff. Quite the opposite with Quantum Tangle.

With this novel, you get some great character development, some aliens, some romance, some interesting science, some battles, and more. It’s a pretty cool way to spend your time reading.

My review will start below, but I do want to mention that I got the book free on Amazon if you want to just jump over there and download it right now – click here to view the book on Amazon.

As always, the review below contains some minor spoilers, but nothing that will ruin the story for you.

I knew that I was in this one for the long haul when … Seth got infected/fused with the alien. So yeah, that’s pretty much the start of the book, but it was a pretty intriguing beginning. Especially once this alien starts immediately devouring data to get as much knowledge as possible – it makes you wonder if this is just a curious being or one that intends to use that knowledge for some nefarious purpose.

He removed his headset and used an overhead grip to pull himself out of his couch to stumble into the cabin, still groggy and disoriented. Despite the recent tumble through sub-space, nothing seemed out of place in what was essentially his home. Actually, he thought, much of it was out of place, but that was the usual state of things here. “Wait for what?” He glanced into the tiny galley. No one there.

“Learning language. You are Centauri.”

“So I’ve been told.” Seth returned to the cockpit. “Where are you?” He reran the scanners to look for ships in the vicinity. His curiosity, easily the greatest source of his troubles, had taken over. He liked it better than fear, anyway. Whoever was accessing his system was doing it in a way that the Dutchman didn’t even notice now. The intruder remained undetectable. Impressive, whatever it was. Then again, he was a long way from home. “Closest ship is a Feydan trader. Not exactly something that can break into this place.”

What surprised me about this book … was the sort-of mad scientist character that appears close to the end. That and what I guess you could call zombies, which were some of the facility test subjects that did not go as planned. This was interesting though cause it gave the story a bit more depth, in addition to explaining why certain things were happening.

My favorite character … this is really a tough one for me to call. I really like Seth, as well as Khoe and Caelyn. Seth, of course, has a lot of really cool scenes (plus some funny lines) and I felt bad for him when he was apart from Khoe. And Caelyn is really interesting because one moment he is really mysterious and the next really strong.

Final thoughts … overall, I found this to be a really fun read, and I say this as someone who hasn’t read much in terms of space operas. The writing was strong (in my opinion), the characters were fully developed and the premise of the story was really interesting. There is a lot of plot, yet it still seems like a quick read – or maybe that’s just where I didn’t want to put it down. For people who enjoy really long books, this one isn’t crazy long but I still feel like it’s long enough to be considered novel-length. And, since this book is part of a series, let me point out that it can be read as a standalone and it does NOT have a cliffhanger ending.

And remember, this book is on Amazon.