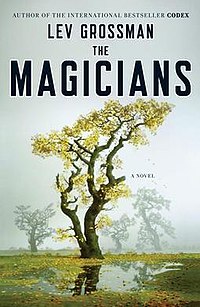 Have you read Lev Grossman’s The Magicians? The book came out a few years ago. It’s the first in a trilogy and the third book was released last summer. You might already be a fan of the series. Of you might want to start catching up in this series now because it’s being turned into a television series on the Syfy network.

This book is focused on a young guy who learns to practice magic in the current world. So, it’s old school magic in modern times. Here’s the full synopsis for the book from Amazon:

Like everyone else, precocious high school senior Quentin Coldwater assumes that magic isn’t real, until he finds himself admitted to a very secretive and exclusive college of magic in upstate New York. There he indulges in joys of college-friendship, love, sex, and booze- and receives a rigorous education in modern sorcery. But magic doesn’t bring the happiness and adventure Quentin thought it would. After graduation, he and his friends stumble upon a secret that sets them on a remarkable journey that may just fulfill Quentin’s yearning. But their journey turns out to be darker and more dangerous than they’d imagined.

Yeah, it kind of reads like a Harry Potter meets X-Men kind of story, eh? Obviously, I have not read the series myself…yet. Since it’s coming to Syfy, I will probably go back and pick this one up. If you don’t think it’s worth my time, then feel free to let me know in the comments 😉 because the reviews on it seem to be a mix of “omg, it’s awesome” to “don’t waste your time” to “it could’ve been better.”

Battlestar Galactica Reminds Us That Humans Can Be Evil Too

What Can We Expect From Series Two of Westworld?