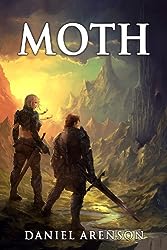 Recently I finished reading The Dragon Chronicles (review coming soon), which features a story by Daniel Arenson. It was my favorite story in the whole collection, which led me to search out other books by him.

Since dragons aren’t one of my favorite things to read, I was excited to learn that he has other books available in the fantasy genre. And, it just so happens that the first book of his “The Moth Saga” series is actually on Amazon and other retailers. I know this book has been out for a few years, but maybe it’s new to you, too.

If you’d like to sample it before downloading the book, check out the excerpt below.

They entered the shadows, seeking a missing child.

Torin swallowed, clutched the hilt of his sword, and gazed around with darting eyes. The trees still grew densely here–mossy oaks with trunks like melting candles, pines heavy with needles and cones, and birches with peeling white bark. Yet this was not the forest Torin had always known. The light was wrong, a strange ocher that bronzed the trees and kindled floating pollen. The shadows were too long, and the sun hung low in the sky, hiding behind branches like a shy maiden peering between her window shutters. Torin had never seen the sun shine from anywhere but overhead, and this place sent cold sweat trickling down his back.

Bailey walked at his side, holding her bow, her quiver of arrows slung across her back. Her two braids, normally a bright gold, seemed eerily metallic in this place. The dusk glimmered against her breastplate–not the shine they knew from home, but a glow like candles in a dungeon.

“I don’t know,” she said. “Yana has been strange since her parents died in the plague. Maybe she thought it would be an adventure.”

Despite himself, Torin shivered. “An adventure? In the dusk? In this cursed place no sensible person should ever enter?”

Bailey raised an eyebrow and smiled. “Why not? Aren’t you feeling adventurous now?”

“No.” He shook his head vehemently. “Adventure means sneaking out to Old Garin’s farm to steal beets, mixing rye with ale, or climbing the old maple tree in the village square.” He looked around at the shadowy forest, and his hand felt clammy around his hilt. “Not this place. Not the dusk.”

They kept walking, heading farther east, deeper into the shadows. Torin knew what the elders said. Thousands of years ago, the world used to turn. The sun rose and fell, and night followed day in an endless dance. Men woke at dawn, worked until the sunset, and slept through the darkness.

Torin shivered. He didn’t know if he believed those stories. In any case, those days were long gone. The dance had ended. The world had fallen still. Torin was a child of eternal sunlight, of a day that never ended. Yet now…now they were wandering the borderlands, the dusky strip–a league wide–that was neither day nor night, claimed by neither his people nor the others…those who dwelled in the dark.

A shadow darted ahead.

Torin leaped and drew his sword.

There are six books currently available in this series, so if you enjoy it there is a lot for you to read! Get your copy from Amazon now!