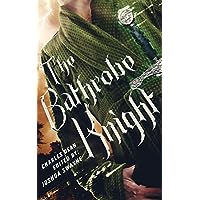 Recently I was checking the hot new releases list on Amazon for science fiction book and immediately The Bathrobe Knight caught my eye. You have to admit that the cover doesn’t exactly scream “science fiction” or even “fantasy,” so that intrigued me. Plus, the title is kind of brilliant.

While I have not had a chance to read this book, I did see some reviews mentioning how it is great LitRPG and that the writer does a pretty good job with humor (which I would expect from the title).

Darwin, a video game addict, was sitting in his bathrobe and slippers playing his favorite MMO on a Christmas night when an uninvited guest breaks into his house to steal his belongings. After the scuffle is over he finds himself transported into one of the sword and magic RPG-style MMOs that he has always loved to play, albeit one he has never heard of, where he has to overcome trials and tribulations at every turn as he fights for his life alongside new companions.

So, if this kind of story is of interest, you might want to take a look at the excerpt below or head on over to Amazon to check it out.

Darwin felt as though he had two major secrets in life. The first was one that he knew would probably get him laughed out of the office. The other was the type sci-fi movies and bad books had made him too scared to ever share, lest he end up in a lab somewhere.

That’s why every morning before work Darwin had a ritual that he couldn’t deviate from. Blue contacts. Tall men’s suits that hung a little loose. Extra-worn nail files. These items were Darwin’s mask. The mask that stopped anyone from finding out his first secret. That his eyes were red. That his muscles were embarrassingly large and that his nails had come pre-sharpened.

The second secret Darwin kept, the one he was most worried about breaking his cool guy persona, was ironically one shared by many people at the same office. He was a gamer. He spent his nights with a complete group of strangers in a mystical world of magic and swords where he and every one of the 10 million people playing were there to save the day. He was a hero. He was Arch Lance Ser NightVale, the great level 72 White Knight Commander of the StormGuard Alliance and leader of the 2nd Hope raid group. He smote vile criminals at the tip of his spear and in his free time saved damsels in distress. This, he knew, of all the facets of his otherwise rather tedious existence, would bring him the type of shame that lasts for generations.

No matter how much shame his secret would bring, though, he just couldn’t stop playing. Day in and day out, he was at the computer. He didn’t even pause his game to eat. It was always ramen, spaghetti, or rice at the computer. The only things that let him know when holidays were coming up or his birthday was near were the in-game notifications and prizes that gave uneventful days like Christmas a meaning. After all, games offer double rewards for grinding on Christmas.

Grinding in games was something he looked forward to so much that he even got off on little inside jokes about the activity. For instance, he had told his coworkers that this particular Christmas he was going to spend the entire time grinding with his special girl. They asked if he had any other plans, and he just winked, nudged, and said, “Yeah, we’re going to go to the mountains where there will be plenty of staff usage.” He thought he sounded cool, and no one had the heart to tell him otherwise. And that’s exactly where Darwin was on Christmas. Grinding in the mountains. In fact, after reaching Mount Horandur, he had managed to kill more Frost Drakes than any other Knight on the server, which may have had something to do with the little detail that he never slept and wasn’t hampered by those ridiculous burdens like family dinners or having Christmas presents to open.

It was for this reason that he was stunned when around 8 pm Christmas Day, there was a knock on his door. He moved to get up from his swivel chair then stopped himself. He was in a robe and slippers, his contacts were sitting in solution in their case on the bathroom sink, and his unfiled nails were starting to resemble claws. Anyway, who would be going door to door at this time, and on this day? Darwin wondered if he should walk quietly over to the front door and peek at who his visitor was. But . . . no. Without his mask in place, it was too risky. He looked around quickly to reassure himself that all the lights were off and then for good measure turned the volume on his computer all the way down. The quiet persisted for a few minutes, punctuated only by the clicking of his mouse and keyboard, during which time he couldn’t bear to look away from the game for more than a few seconds at a time. Until the knocking began again. Three taps, and then the doorbell, which no one had ever used. It was a sound he felt he should have recognized though he couldn’t recall a time when he had merited any visitors. Go away! He wanted to call. I’m not home.
Whoever it was did not go away. Darwin had almost decided that it must be Mrs. Old Lady from across the street bringing him leftover Christmas cookies and was seriously considering that they might be a treat delicious enough to warrant putting in his contacts. Another knock came, more forceful, and then a sound as if someone had body-slammed his door followed by the sound of splintering, cracking wood. Darwin stood up sharply. He thought he heard footsteps in the front hall. Darwin froze and then grabbed the only pointed object he could find: a butter knife. He made his way through the hallway as quietly as possible. He chastised himself about how each step he took towards the unknown assailant was too loud. He should have changed the floorboards. Why did I have to go with a hardwood floor? Carpet wouldn’t creak like this, he thought.

Unfortunately for Darwin, his worst fear about the burglar having a gun and having heard him were both true. The burglar’s footsteps sounded out in a terrifying jaws-soundtrack-like vibrations as they approached him in the hallway. *Thump Thump. Thump Thump. Thump Thump.* Darwin clenched the dull, edgeless blade while frantically looking around for anything that might be more effective than his butter knife, +1 against spaghetti. *Thump Thump. Thump Thump.* How long does it take to cross the living room into a hallway, you idiot? Just get this over with already! He yelled in his head, jumping out and throwing the butter knife as hard as he could at the direction of the footsteps.

The surprising thing, to both the burglar and Darwin, was that the blade had hit the burglar directly in his right eye, not penetrating but causing him to fall over and squeeze the trigger on his gun a few times. The shots missed. Not waiting for the burglar to get back up, Darwin dashed at him and kicked the burglar’s face as the would-be thief made a comic attempt to hold his eye, get up, and not lose the gun at the same time. Success! He probably should have stopped kicking, but Darwin had seen far too many action and horror movies to not make his best attempt at a “double tap” as he kept kicking the man over and over again in the face. Slippers of +10 face-smashing.

No sooner had the questions popped into his head than a status window appeared. It showed a picture of him silhouetted with his arms spread wide like Da Vinci’s Vitruvian Man and his clothes off to the side with lines connecting them to the appropriate body parts. Is this . . . me? he wondered, looking at the numbers and “attributes” listed to the left of the image of him in the status window. Upon seeing all the numbers next to each attribute, his gamer instinct kicked in. He highlighted each attribute looking for the “benefits” and trying to read what each did. Darwin’s gaming nature would likely have kept him fiddling around with the status window until work started the next year if it weren’t for the sudden white light that shot up from under his feet. A ding sound occurred and then one final message window appeared in front of him before the light consumed his field of vision.

For more on this book, click here to view it on Amazon.